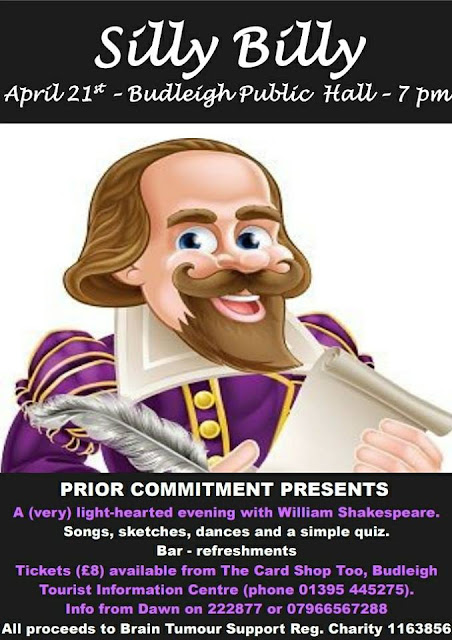 In this special year for Sir Walter my eye is caught by any event which he or his spirit might have inspired. That recent talk on clay pipes for example, presented by Lympstone History Society, proved irresistible, all the more so after my research uncovered the curious story of Sir Walter Raleigh pipes: click on
http://raleigh400.blogspot.co.uk/2018/01/of-pamphlets-and-pipes.html
to read all about it.

Curiously, the speaker, Charlotte Coles, hadn’t come across the story. In spite of that, the talk didn’t disappoint. I’ll be looking more carefully at my collection of bits and pieces of pipe found when we worked or played as children in the ploughed fields of our market garden in Somerset many years ago.

So I’ll be adding Prior Commitment’s production of ‘Silly Billy – A Celebration of Shakespeare’ to my calendar of Raleigh events in 2018. From the pen of local writer Steve Andrews, it’s described as ‘a (very) lighthearted evening with William Shakespeare’ with ‘songs, sketches, dances and a simple quiz’ and takes place in the Public Hall in Budleigh on Saturday 21 April at 7.00 pm.

Steve has been writing plays and pantos for Budleigh audiences for many years, raising money for good causes from the production proceeds. ‘Silly Billy’ will boost funds for the charity Brain Tumour Support
http://www.braintumoursupport.co.uk/

I don’t know whether Steve had Raleigh’s 400th in mind when he embarked on the Shakespeare project, but as 2018 drew nearer he found himself gripped by the story of Devon’s great Elizabethan adventurer. Originally he’d conceived a play about Raleigh as light-hearted entertainment but his ideas have changed with more research into Sir Walter the man -  ‘self-made, courageous, quite capable of his own political machinations but  ultimately doomed’.

It’s a dramatic presentation, he tells me, not a historic documentary but he’s aiming at some degree of authenticity. One way of achieving that has been to use Raleigh’s formidable wife Bess as a narrator. ‘It's been rather obsessive doing this,’ he admits. ‘Such a brilliant tale to tell.’

I look forward to further news from Steve on the progress of his tribute to Sir Walter – provisionally entitled ‘From Exe to Axe’ – and details of the production.

Of course there are those who believe that Sir Walter wrote plays in addition to his other achievements, and even that it was his quill which was responsible for some of Shakespeare’s work.  I don’t think Steve is going down that path, but you never know… Creative thinking can suddenly present new perspectives.