A Merrie Tale about an Ale 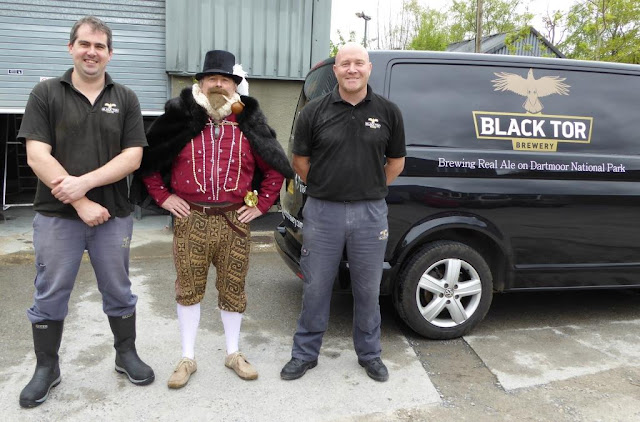 ‘Twas in the merrie month of May that with my good lady we paid a visit to Master Jhonathan’s Black Tor alehouse, on the outskirts of the fair village of Christow in our fair county of Devon.

Master J. is the clever alemaster who has learnt that this blessed year of our Queen Elizabeth the Second, the sixty-sixth of her reign, is also the 400th anniversary of my ignoble death at the hands of that Scottish upstart and total creep unworthy to sit on the throne of England.

Attired in our most divine and costly apparel, bestrewn with precious pearls sewn by our own fair hand, complete with hat adorned with ostrich feathers from the burning plains of Africa, we’ve been invited to add the precious hops so vital for our special brew. The wondrous drink is of course named Raleigh Ale 400.

At eleven of the clock we were greeted at the alehouse by Master Jhonathun and his man, worthy fellows both as ye can see from the picture.

But this image somewhat disturbeth us. Our great height had always helped to keep us in high esteem with Good Queen Bess and her court.  And now to our dismay we see that we are revealed to be no more than a mere dwarf compared to the giants that Devonians hath now become. Could it be the ale, we wonder? 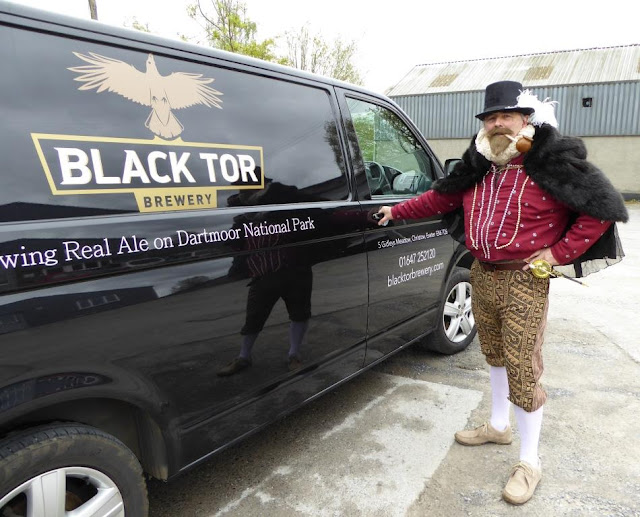 We greatly admired Master Jonathen’s robust black steed. He told us it had the power of 40 horses, much needed to transport casks of his ale up the slopes of hilly Dartmoor to taverns throughout our fair land. 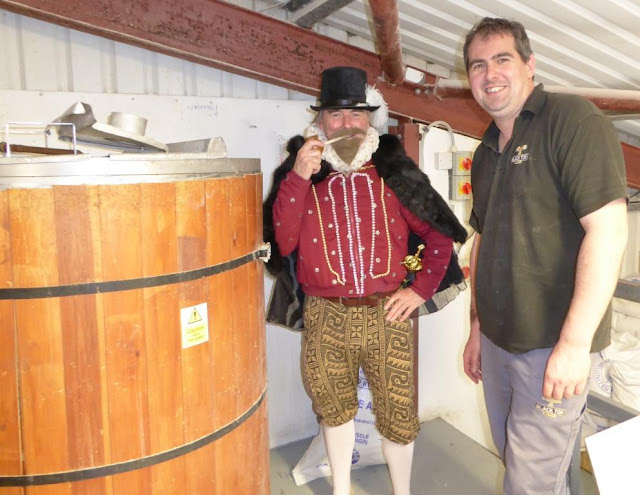 Master Jhonethan did most courteously welcome us into his alehouse and did explain the mysteries of the wondrous science practised by master brewers. Truly, ‘tis a most divine skill and one that is cherished by us who partake of this sacred brew, this nectar worthy of the gods. 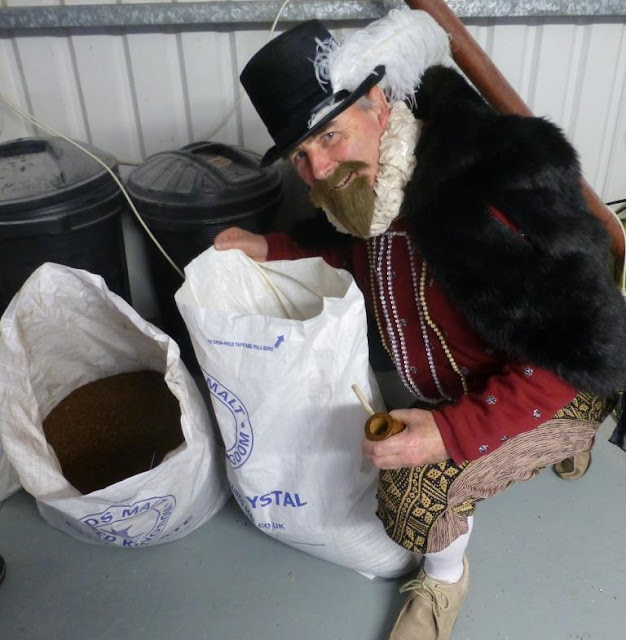 We were able to compare the different ingredients which would make our ale. Delicious aromas were arising from the sacks of malted barley, grown on English earth sweeter than that of Eden’s fruitful meadows 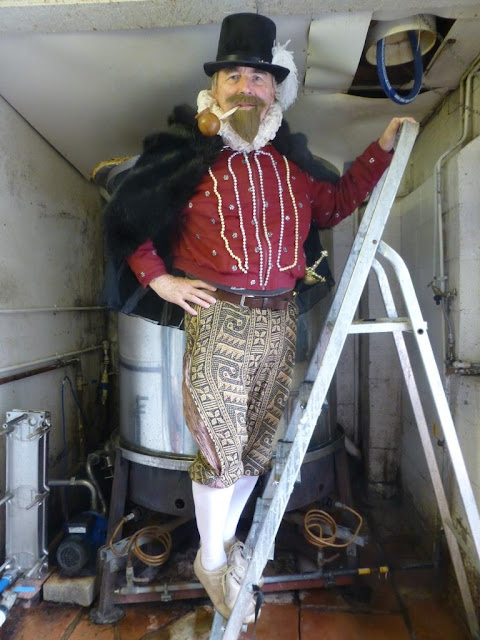 Standing on the stepladder to inspect the divine brew did greatly restore our reputed stature. 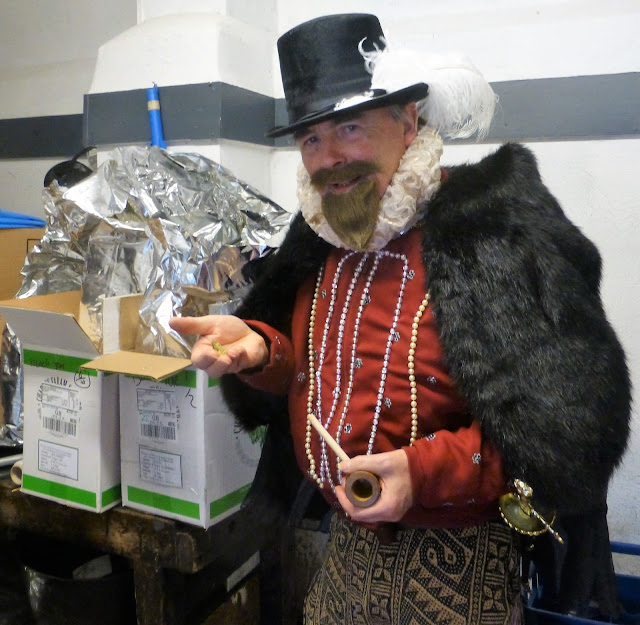 Master Jonnathon has worked cunningly on the preparation of our ale. He has searched the distant reaches of the globe for the vital ingredient of hops which he told us were of the finest pedigree, but grown in the fair county of Herefordshire rather than that distant and somewhat foreign county of Kent. Their delicate perfume will infuse the ale and give it a fruity tang

Master J. told us that he had decided to flavour it with essence from the skin of oranges from Seville, this being a tribute to yet another of our achievements in first bringing the seed to the fair land of England. That fact of course is known by only a select few. The vulgar multitude believe merely that we were responsible for introducing what they vulgarly call ‘spuds and ciggies’ into our fair land. 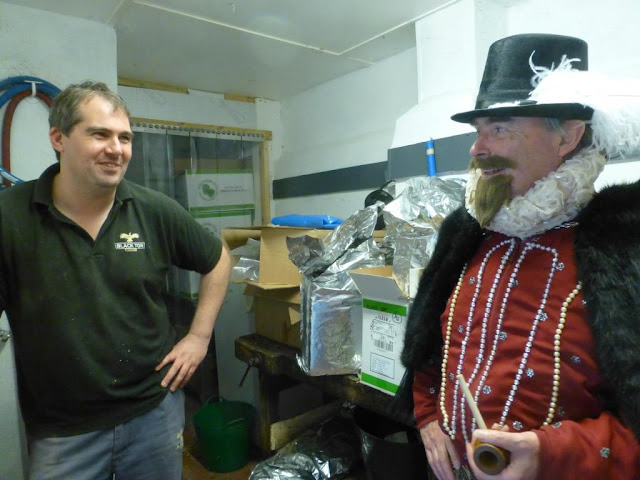 We did compliment Master Jonaethan most wholeheartedly on the excellent work that he was doing at his Black Tor alehouse and we did exchange many merrie quips as we discoursed on diverse matters. 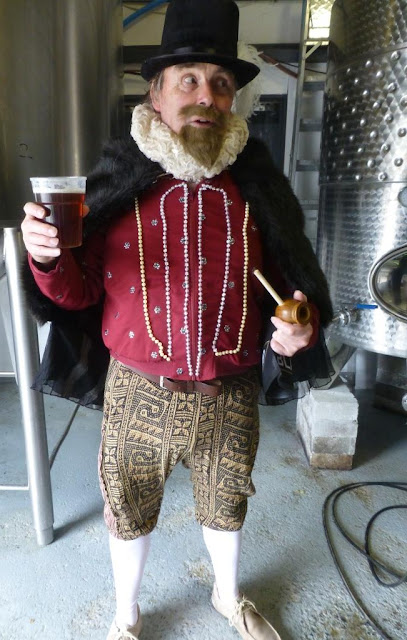 And then came the divine moment so keenly anticipated when we were invited to sample our Raleigh 400 ale. ‘Truly,’ quoth I, ‘this be a nectar worthy of the gods. Oh surely this ale will restore our fortunes in the minds of the vulgar multitude, both in this fair land and in the New World that we so bravely explored.’ 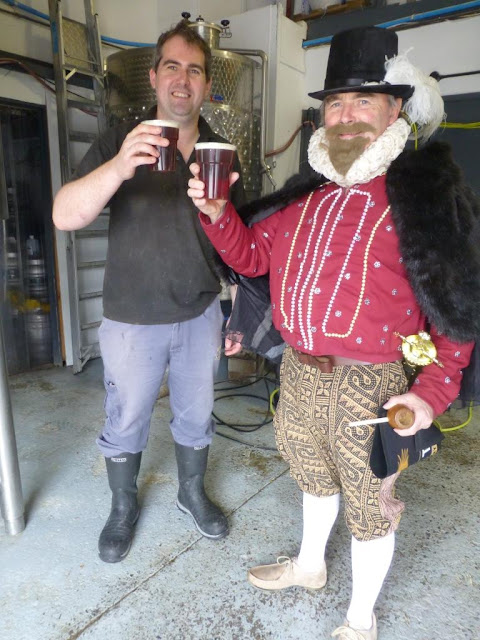 'Tis indeed an excellent brew which will do great honour to Master Jonuthunn its skilled creator. The good man joined us with a glass, and we toasted each other many times and discoursed of further weighty matters.

Master Jonathun did kindly bestow this fine tapestry embroidered with the name of his alehouse which he said could be used as a mat. He further suggested that it could be used by mice, which in sooth did puzzle us.

‘Twas a speedy journey back from the pleasant land of Dartmoor, and finding ourselves with leisure in plenty we decided to deliver more news sheets from the fair museum of Fairlynch about our Raleigh 400 exhibition to the good burghers of the fair town of Exmouth, from where we had oft times sailed on daring excursions. 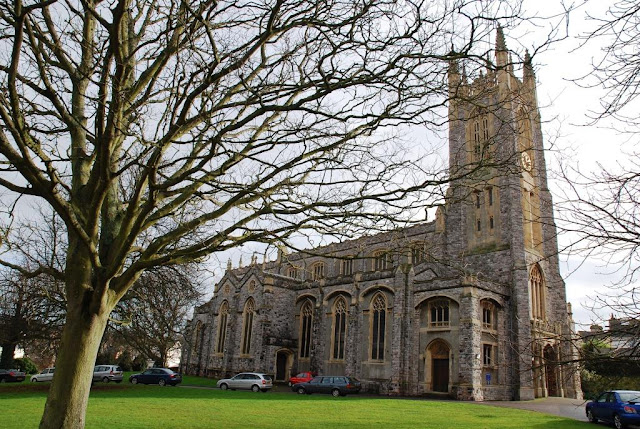 We parked our steed outside the fair church of Holy Trinity where the good vicar has promised us that he will conduct a service to remember us on Sunday 28 October this year. ‘Twill be just hours before that fatal day 400 years ago, when our enemies conspired to bring us to a bitter end on the scaffold. Chief among them was that treacherous runt Cecil.

But oh, how cruelly is the vulgar multitude remiss in recording such tragic events! We passed through one of the town’s many Academies of Learning where we did leave some of the news sheets. And ‘twas there in that place of learning we were told: ‘Oh yes. The Queen chopped your head off, didn’t she?’

Clearly they had not read our History of the World.  'Tis the acclaimed book that we wrote during our unjust imprisonment in the Tower of London to annoy the Scottish upstart. And verily it did annoy him no end, for the fool tried to suppress it. Yet did the work have a wondrous effect on Master Oliver Cromwell, for he did avenge our tragic demise.

Yeah, verily, you could say that the equally foolish King Charles I was a chip off the old block.

A learned historian hath written that our ghost did 'pursue the House of Stuart to the scaffold'. They were indeed a bad lot. Good riddance to them, we say.

And later, although the vulgar multitude knoweth nothing of this, they do say that our acclaimed book did inspire the founders of the Great New World Republic of the United States of America.

Ah, well. ‘Even such is Time’, as I have elsewhere written in one of my many fine poems. 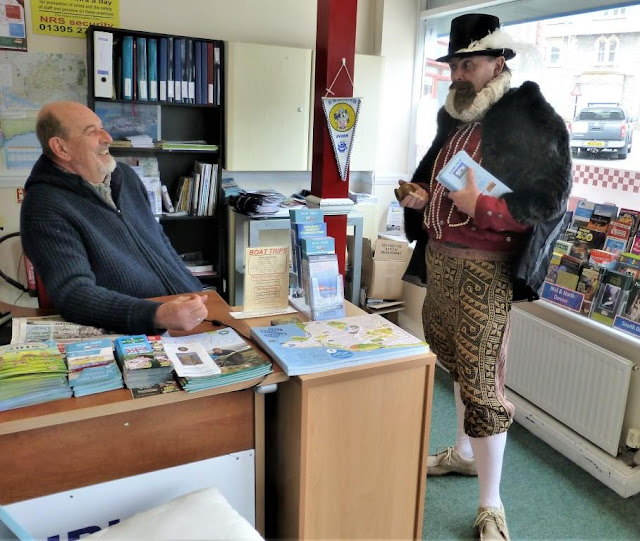 At the Tourism Information Centre we were cordially greeted by Master Paul Goodchild. He seemed better informed about our tragic end than the people at the Academy, and we discoursed of many matters pertaining to the glorious reign of our Good Queen Bess. 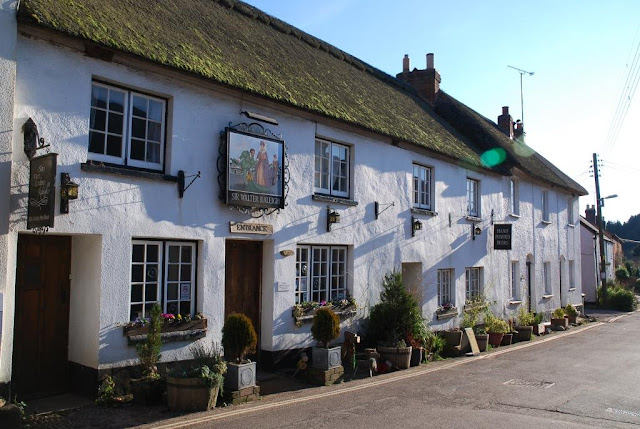 Master Joanathon tells us that the official launch of the fantastic Raleigh 400 ale will be on Friday 25 May at six o’ the clock in the evening at East Budleigh’s Sir Walter Raleigh tavern - where else?

This is the ancient house of refreshment  so nobly named after us by the good burghers of Budley. We were outraged to learn that indulgence in the vapours of the wondrous and health-giving tobacco plant, formerly enjoyed in taverns throughout the land, has now been forbidden by royal edict.

Oh well, no doubt the burghers will feel obliged to order chips in our honour, but we would prefer them to drink our delicious ale.

And so, adieu and fare thee well.