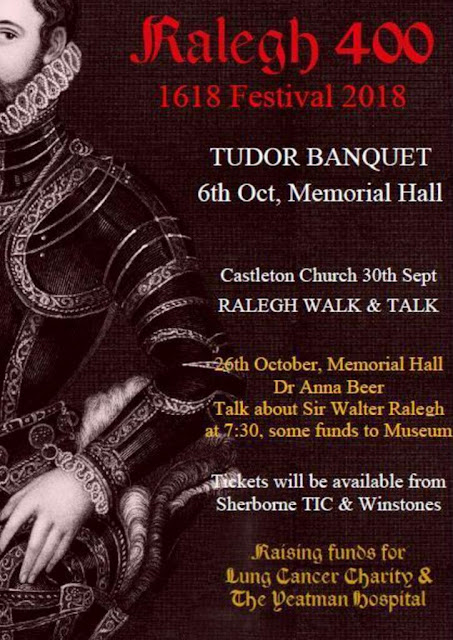 Devon’s not the only county where Sir Walter is being remembered this year. At Sherborne, in the neighbouring county of Dorset, Raleigh built his New Castle in the early 1590s. It was a country retreat from the troubles that he’d experienced at Queen Elizabeth I’s court.

To lose his Sherborne estate when he fell out of favour with her successor James I must have been a bitter experience.

He was deeply attached to his new home, and Raleigh enthusiasts in the Sherborne area are keen to show their appreciation of this remarkable Renaissance man and great British hero.

On Saturday 6 October the organisers of the Ralegh 400 Festival at Sherborne have planned a fantastic Tudor banquet in the town’s Memorial Hall.  Guests include Edward and Maria Wingfield Digby, owners of Sherborne Castle which is staging its own exhibition in honour of Sir Walter this year.

There will be a large table of guests from the Eastbury Hotel, the elegant Georgian building recently acquired by entrepreneur Peter de Savary. The hotel is sponsoring the event by providing its chef and kitchen team. Guests in costume are welcome. 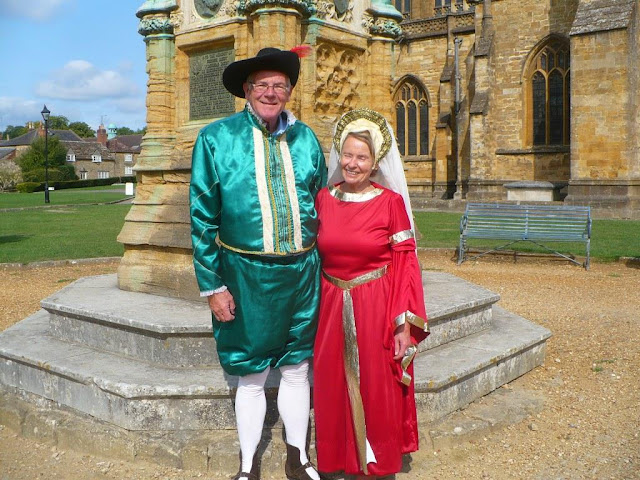 Sherborne enthusiasts involved in the Ralegh 400 Festival include Bob Walden, Chairman of the town’s Twinning Association, and Blue Badge guide Cindy Chant. They are pictured above, shortly after their interview with Sherborne Abbey’s 104FM Radio, conducted by presenter Jenny Devitt.

The interview was followed, inevitably, by Bob Newhart’s comedy turn ‘Nutty Walt’ and then a phone interview with Budleigh playwright Steve Andrews as a prelude to Steve’s recently produced play ‘From Exe to Axe’.

Sadly, bad weather prevented the play’s performance in Sherborne, but the Sherborne Festival feast on 6 October should go ahead without any such difficulty.

Tickets for the Banquet are £30, obtainable from Sherborne’s Tourist Information Centre and WinstoneBooks, Sherborne,. with profits being donated to the charity The British Lung Foundation and Sherborne’s Yeatman Hospital.

On 26 October Raleigh biographer Anna Beer  will give a talk at a meeting of the town’s Historical Society http://www.sherbornehistoricalsociety.co.uk/local-events

Find out more about Raleigh’s Sherborne Castle at http://www.sherbornecastle.com/
The Eastbury Hotel website is at https://theeastburyhotel.co.uk/