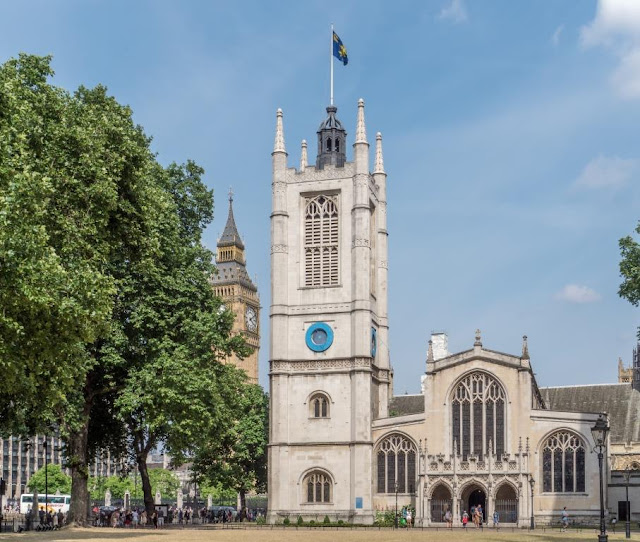 St Margaret's, Westminster: Just one of the various places in London where Raleigh's tercentenary was marked by services, ceremonies and lectures one hundred years ago
Image credit: Reinhold Möller

Too many anniversaries this year in Budleigh, keeping us busy at Fairlynch Museum! Raleigh 400 and the end of WW1 of course.

And then the centenary of children's author and Brownies' leader Jean Blathwayt, for whom I'm designing an exhibition and a Blue Plaque this year.

And of course the 50th anniversary of visits by Imperial College Operatic Society to the little town of Budleigh Salterton. I bet you didn't know that.

What still strikes me as extraordinary is the fact that in the midst of the bombardments and the slaughter of the Great War Britain took time off to celebrate the life of Sir Walter for his tercentenary.

Admittedly they must have known that the war had only another fortnight to run. Admittedly the country badly needed to pay tribute to its heroes - the recently slaughtered ones as well as those of its past. Admittedly British politicians wanted to show their gratitude to America for its support of the Allies, even if it had come in at a late stage. Germany of course had been desperately hoping to keep the USA out of the conflict.

Even so, I am struck today by the energy that went into celebrating the tercentenary, and that was mainly in London.  In the capital it was a prestigious event involving people like the British Foreign Secretary and former Prime Minister Arthur Balfour, Lord Bryce - a former British ambassador in the USA - and numerous distinguished academics such as the Early English and Shakespeare scholar Israel Gollancz.

This is what Professor Gollancz told the nation via The Observer newspaper. It seems today like a very long time ago.

The Raleigh tercentenary falls on Tuesday next, and the occasion is to be commemorated both here and in America in such a manner, Professor I. Gollancz said yesterday in an interview with a representative of THE OBSERVER, “as to emphasise the significance of the place of Raleigh as the pioneer and prophet of Anglo-American relations now happily realised, and also of his position as one of the great heroes of the modern world, embodying the splendour, imagination, and undaunted enterprise of the Elizabethan age.
“His dream of England as the great colonising power was the tragedy of his life, and after three hundred years the moment seems signally appropriate for a joint celebration in his honour by the peoples of the English-speaking world now united in the brotherhood of arms and ideals.
“At Raleigh, the capital of North Carolina, special pride is taken in Raleigh’s name and fame, and a programme has been arranged dealing with his life and work, with special reference to Anglo-American relations. It is proposed, amongst other schemes, to erect a statue of Raleigh there, and a series of meetings is to be held representing Virginia and other States and American institutions.
“It was my privilege from the outset to be associated in the movement with Dr.Page, the late American ambassador, himself a citizen of North Carolina, who up to the time of his illness, and even during his illness, notively co-operated in bringing about the joint commemoration.
“Here a representative committee has been formed, consisting mainly of representatives
Of the leading learned societies, with Mr Balfour, Dr.Page, and Lord Reading as honorary presidents, Lord Bryce honorary chairman, Sir Charles Wakefield honorary treasurer, Bishop G.F. Browne and Professor C.H. Firth vice-chairman, and myself as honorary secretary. On the committee American interests are well represented. His Majesty the King has been graciously pleased to become patron of the commemoration.

“A varied programme has been arranged. On Sunday (to-day) a special afternoon service, to which the public will be admitted as far as space allows, is to be held at St Margaret’s, Westminster. The rector, Canon Carnegie, will preach, and the Lessons will be read by eminent representatives of Great Britain and America. St Margaret’s is regarded by Americans with special reverence, for there Raleigh’s remains were interred, and there, in 1882, American citizens placed the Raleigh window in his honour. At the morning service at the Temple Raleigh will also be commemorated, the Master, Dr.Barnes, being the preacher.
“On Tuesday there will be a public meeting at the Mansion House, at which the speakers will be Lord Bryce, Mr Balfour, General Sir Ian Hamilton, Lieutenant of the Tower, and, on behalf of American citizens, the American Consul-General, and Major J.Baker White, Judge-Advocate, American troops in Great Britain and Ireland. Mr Edmund Gosse will deliver a panegyric on Raleigh.
“In the evening the Benchers of the Middle Temple will give a Raleigh tercentenary dinner. Raleigh was a member of the Middle Temple, and the dinner will take place in the famous old hall, where Shakespeare’s ‘Twelfth Night’ was acted in February, 1601-2.
“At Exeter there will be a special commemoration for Devonshire folk. A service will be held in the Cathedral, and there will be a public meeting, at which Lord Fortescue, the Lord Lieutenant of the county, will preside. At Woolwich, associated with Raleigh’s voyages, there will also be a special commemoration; and at Jersey, of which he was Governor, and where his memory is held in special honour, steps are being taken for a permanent memorial.

“As regards other permanent memorials, my own proposal for a Raleigh House in London, mainly for promoting intellectual co-operation between British and American scholars, and to serve as a centre for their meetings, has been generally approved by the Committee and has received support in many quarters. Such an intellectual centre in London is greatly needed in many ways and for many purposes, especially for the work that scholars of the English-speaking world must take a leading part in at no very distant date, let us hope.


“Many other functions have been arranged, especially a series of papers on various aspects of Raleigh’s life and work by members of the Committee, which have been assigned by the Committee to the various societies co-operating in the movement. Thus on October 30 Professor C.H. Firth will read a paper on Raleigh’s ‘History of the World’ before the British Academy at Burlington House at 4.30.  On November 1, at King’s College, at 5.30, I am giving an address on ‘Shakespeare and the New World.’ Mr Lionel Cust will read a paper next month on Raleigh’s portraits. On November 27 Sir Harry Stephen will read a paper before the Royal Historical Society on Raleigh’s Trial, and on December 10 Sir Sidney Lee will deal with Raleigh’s discovery of Guiana, at the Royal Colonial Institute.”