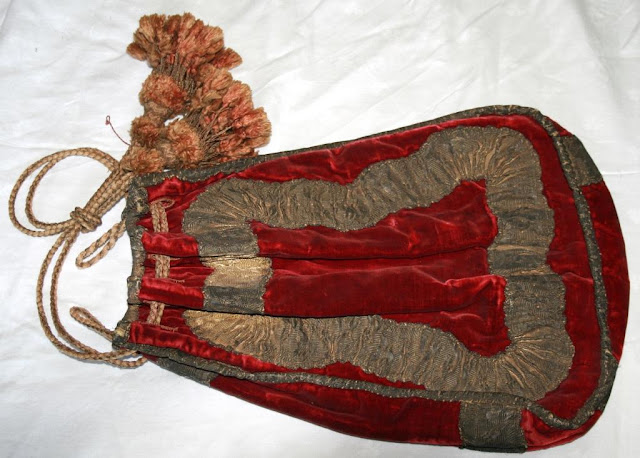 One of the excitements about old houses is unexpected discoveries. When, while emptying rooms in preparation for repairs at West Horsley Place, an old and rather pretty decorated red silk velvet bag emerged, we initially thought little of it; but sometimes objects open a realm of possibilities and a glimpse deep into history.

Could this bag once have held the embalmed head of Sir Walter Raleigh, brought here by his grieving widow Bess Throckmorton when she came to live with their younger son Carew, owner of the house and probable builder of the mellow renaissance brick front that fronts the house today?

We do not yet know; but extensive coverage in the press and media around the 400th anniversary of Raleigh’s execution on 29thOctober has spread interest in this gruesomely evocative story like wildfire.

We are seeking a suitably qualified expert, with the help of the V & A, to tell us more about the bag. We will share anything more we can learn.

October 29th marks the 400th anniversary of the execution of Sir Walter Raleigh. Last night at St. Mary’s, Horsley a gathering was held to celebrate the life and poetry of the great man.

West Horsley Place had always played a part  in the postscript of Raleigh’s story; as the residence of his son Carew and widow Elizabeth. That part however, may well be more tangible than we realised. Visitors who have been on a tour of the house since 2015 may recall being shown a red velvet bag in the drawing room. The bag was discovered after Bamber and Christina Gascoigne inherited the house in 2014.

Carew Raleigh owned the estate between 1643-1665. Contemporary accounts record that, after the head had  been displayed for the assembled crowd following the execution, it was placed in a red velvet or leather bag and presented to Raleigh’s widow, Elizabeth ‘Bess’ Raleigh (1565 – 1647).  Her love for her husband was such that Bess arranged for the head to be embalmed and then kept it by her side until she died 29 years later – at West Horsley Place, where she had come to live with her son and his family.

Following Bess’ death, Sir Walter’s head is understood to have been placed in a cupboard under the stairs at West Horsley Place, reappearing in 1660 when tragedy struck the family and Carew’s three young children died in an epidemic.  The head was then buried alongside the children in the side chapel of neighbouring St Mary’s Church, West Horsley.

When, in 1703, the Raleigh grave was opened (for a further burial), William Nicholas – then residing at West Horsley Place – recorded in his diary the head of Sir Walter Raleigh being ‘dug up’ with ‘no bones of a body to it, nor any room for any’.

As for the red bag, it receives no further mention.  That is until a recent visitor to West Horsley Place – who is a respected authority on historic dress – was drawn to an old red velvet bag that had been found in the attic space when it was cleared for emergency repairs.

Knowing that Bess lived at West Horsley Place and that she kept Sir Walter’s head by her side at all times, in a red velvet or leather bag, the Mary Roxburghe Trust – the charity established to rescue and restore West Horsley Place – was keen to find out whether this could be the famous bag.

An initial inspection of the bag indicates that it was made in the early 17th century. Its design, the material, sewing techniques and construction method are consistent with this period.  The bag has now been sent for further analysis to try to establish whether it could be the long-lost bag that contained Sir Walter’s head.

Commenting, Peter Pearce, Director of the Mary Roxburghe Trust, said: ‘In 1665, Carew Raleigh sold the estate to Sir Edward Nicholas, First Secretary to Charles I and Charles II. It is known that some of the contents were included in the sale – including a collection of family portraits which remained part of the estate until the early 20thcentury – but, to date, we have been unable to find any further reference to the red bag.  It was widely presumed that the bag had been buried with Sir Walter’s head in 1660.’

‘We are greatly encouraged by the results of the initial inspection, and now look forward to finding out more. West Horsley Place dates back to the 15th century, and the Grade I listed manor house has passed through the hands of many illustrious owners – including Henry VIII, who enjoyed a 35 course lunch in the Stone Hall. Although this grand old house fell into disrepair in the course of the 20th century – it is now on the Historic England ‘At Risk’ Register –  it has an extraordinary past which we look forward to unravelling and sharing with the public as we take steps towards its rescue and restoration.’

The Raleigh family’s association with Horsley and West Horsley Place particularly continues to be held dear within the village. This weekend children from the local primary school, The Raleigh School, attended a special service at St Mary’s Church to commemorate the 400th anniversary of Sir Walter’s death. There has been national and international news coverage of the story, which will spread awareness of Horsley’s special relationship to the Raleigh family and the future of West Horsley Place.