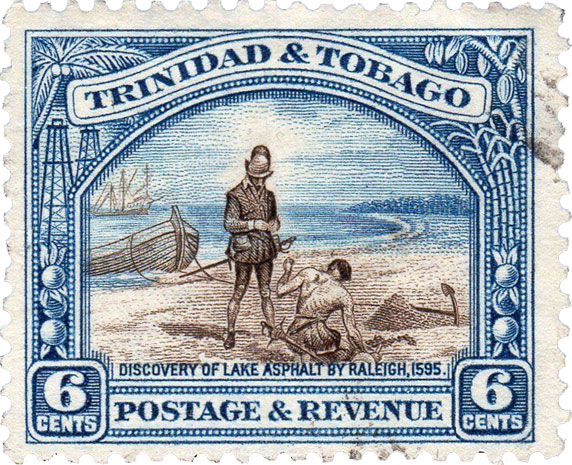 People will tell you all kinds of silly stories about how Sir Walter invented potatoes and about his tobacco smoking exploits.

But have you ever thought about how journeys today are more comfortable thanks in part to one of Sir Walter’s lesser known discoveries?

In 1595, during his exploration of the Caribbean island of Trinidad he found the Pitch Lake, the largest natural deposit of asphalt in the world. Raleigh found the pitch useful for caulking his ships. It was, he wrote ‘most excellent good’, commenting that ‘it melteth not with the sunne as the pitch of Norway’ and noting that it was ‘for ships trading the South parts very profitable.’ 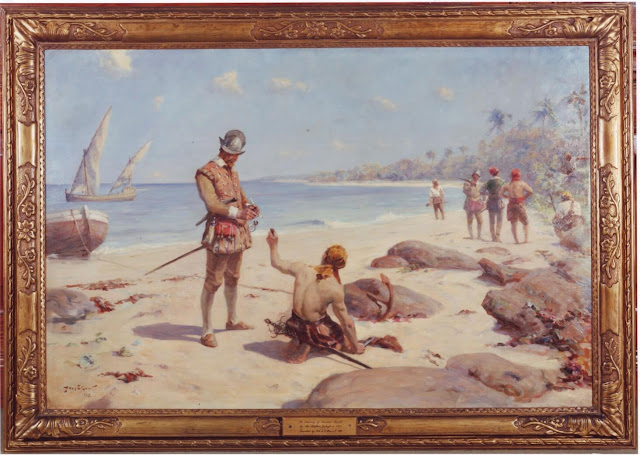 Painting by an unknown artist of Raleigh discovering the Pitch Lake

Many years went by before horse-drawn transport gave way to modern vehicles. By the early years of the twentieth century, mechanised road transport was becoming commonplace. The newly developed motorcycles, steam and petrol cars needed a good flat surface on which to run, and Tarmac Limited came up with the solution.

Originally, to make the road surfacing material in a process developed and patented by Edgar Purnell Hooley in 1902, the company used aggregate mixed with coal tar, a once commonly available by-product from the many town gas works that heated coal in a closed retort. In 1971 Tarmac acquired Limmer and Trinidad, a London based quarry products firm, high quality asphalt from Limmer in Germany and from the Pitch Lake in Trinidad.  Tarmac then became the largest road surfacing contractor and blacktop producer in UK.

Having tried unsuccessfully to persuade various crisp manufacturers to sponsor Fairlynch’s Raleigh 400 exhibition I had hoped that Tarmac might be interested in supporting the Museum. I thought that the story of Raleigh’s little-known discovery of their prize product would be good publicity for the company, but my suggestion was not followed up. Ah well, you can’t win them all.

Described as the 8th Wonder of the World, the Pitch Lake covers about 40 hectares (99 acres) and is reported to be 75 metres deep, containing 10 million tonnes of asphalt. It’s a major tourist attraction with a small museum, attracting about 20,000 visitors annually. 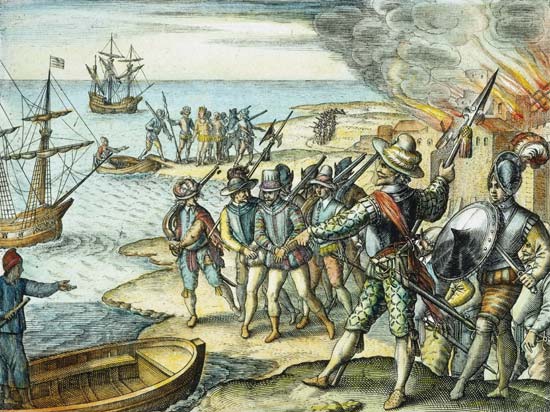 Sir Walter Raleigh's raid on the island of Trinidad in 1595. The captured Spanish Governor, Antonio de Berrio, is being escorted. Engraving by Theodore de Bry

Trinidad was simply a stopping-point for Raleigh on the way to Guiana, now part of modern Venezuela. It was there that he was hoping to discover gold mines which would make his fortune and that of his investors, including Queen Elizabeth I. He failed to find gold, but managed to anger the Spanish by attacking their settlement on Trinidad and capturing the Governor.

But the dream persisted. Raleigh’s second voyage to Guiana in 1617 was prompted by the same desire to discover the fabled City of Gold and its chief, El Dorado, but that too was a failure and led indirectly to his execution on the orders of King James I.

Some historians believe that Raleigh's greatest accomplishment may have been in creating good relations between the English and the natives of South America.

Raleigh was keen to learn about the culture of peoples of the New World, as were members of his teams like the artist John White and the scientist Thomas Herriot.

During the 1595 expedition to Guiana he had befriended the native chieftain Topiawari, making known English hostility to Spain. Spanish invaders had succeeded in alienating large areas of the New World and its tribes. It had been relatively easy for Raleigh to conclude an alliance with the Topiawari, although the latter passed away not long after Raleigh's first voyage.

But the goodwill remained and future English explorers are said to have benefitted from it.

Michael Downes
Born in 1946, in Birmingham UK, of Scottish-Irish parentage, and brought up as a Roman Catholic. Early education may have driven me into teaching, in the belief that schools should offer a more enjoyable experience for children. Studied French at London University, specialising in 16th century literature. Then came 34 years of teaching French, along with red herrings and common sense, at Oundle School. Dabbles, and some people say meddles, in many areas. A passionate gardener, moved to Devon partly to grow ericaceous plants more easily. Other interests include family, cycling and walking. Published articles in Etudes Rabelaisiennes, (a long time ago), and some books - 'Oundle's War' (1995) - 'The Scientist in The Cottage' (2013) - a biography of Henry Carter FRS (1813-95), 'Our Little Clown' (2016) - a biography of Reg Varney - photography, reading, music, studying butterflies, chopping wood, DIY, playing on the scaffold tower, and networking for the Greater Good. Married to Anthea for over 50 years. Three children: Emily, Simeon and Rosanna, six grandchildren and two Bengal cats. I'm a cancer survivor – I hope!