A girl in ‘The Boyhood’?

Below is text of a news release sent to local media: 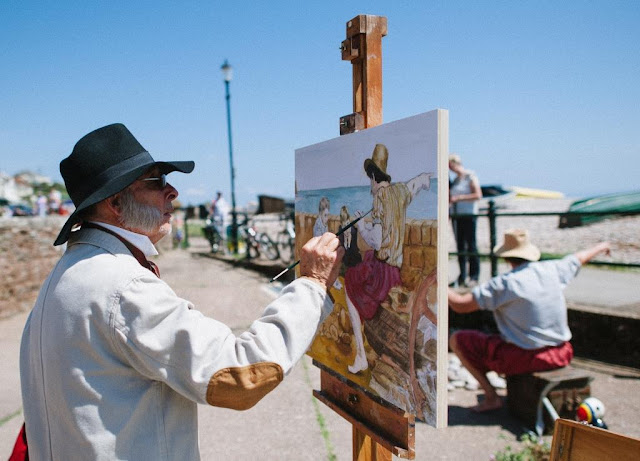 Budleigh’s Art Club will welcome any young person who would like to star in the re-enactment of a celebrated painting which honours one of Devon’s most important historical figures. 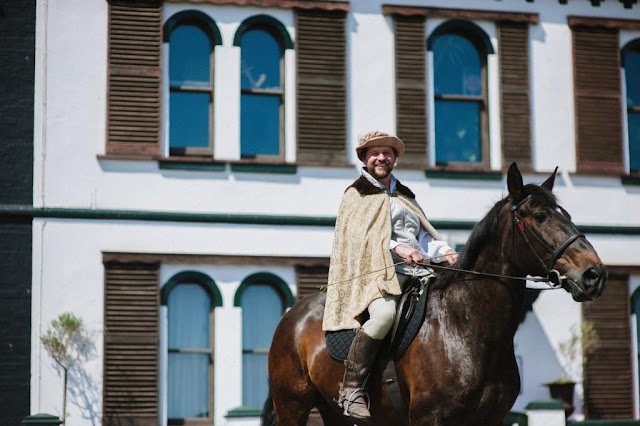 Extra interest was provided on 27 May by a Sir Walter Raleigh on horseback - a star appearance of Rob Batson on Donut, from Budleigh Salterton Riding School http://www.devonriding.co.uk/   Sadly Rob and Donut will be unable to take part in the 28 August tableau

'The Boyhood of Raleigh' was the 1870 work of pre-Raphaelite artist Sir John Everett Millais, painted, so it is said, as a clarion call to empire and foreign adventure and still familiar to many people today through reproductions in millions of homes.

With the approaching 400th anniversary of Sir Walter Raleigh’s death, community organisations near his birthplace are planning events to celebrate one of Devon’s most important historical figures, seen as a founder of one of the first English-speaking colonies in America. 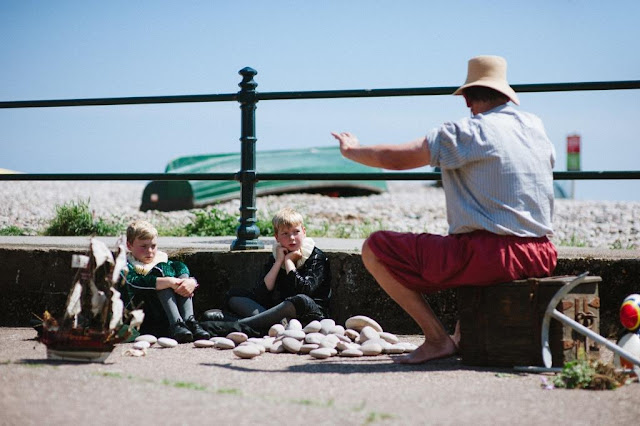 Preparing for the tableau re-enacting Sir John Everett Millais' 1870 painting of 'The Boyhood of Raleigh' on 28 May 2018. L-r: Frank (playing Walter Raleigh), his twin brother Henry (Humphrey Gilbert) with Nick Speare (The Sailor)

While his home village of East Budleigh is holding a street party, the Raleigh Wall on Budleigh Salterton beach will see volunteers from the Art Club and Fairlynch Museum acting out roles in the painting’s composition, including the sailor with his outstretched arm and two local children playing the parts of young Walter and his half-brother Humphrey Gilbert. 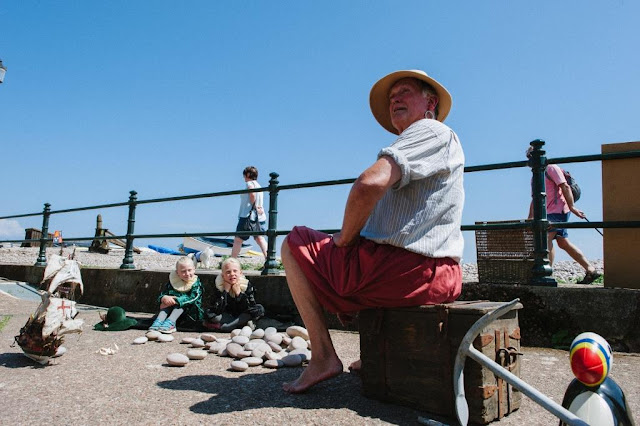 Nick Speare (The Sailor) shows off his earring

They will be joined by other volunteers in Elizabethan costume, including an adult Sir Walter Raleigh. Art Club vice-chairman John Washington will perform as Millais himself. Both events take place during the afternoon of Bank Holiday Monday 27 August. 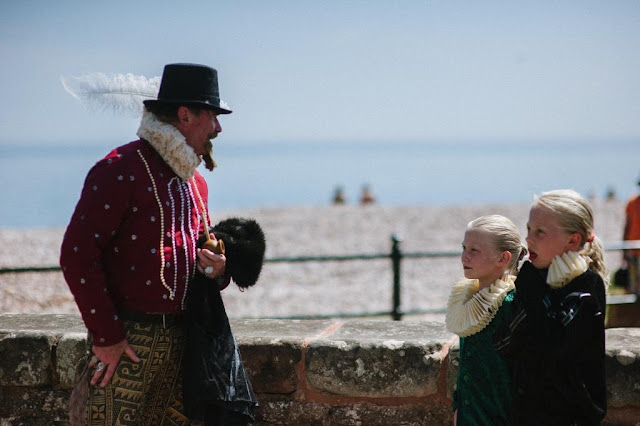 ‘People enjoyed seeing our first performance on 27 May so much that we decided it deserved a repeat,’ said John. ‘We welcome anyone – girls as well as boys –  wanting to play the part of the children in the painting between 2.00 and 4.00 pm. Elizabethan costume is available and all that’s needed is to sit still for 20 minutes or so and show what a good actor you are!  It helps to look at the painting first.’ 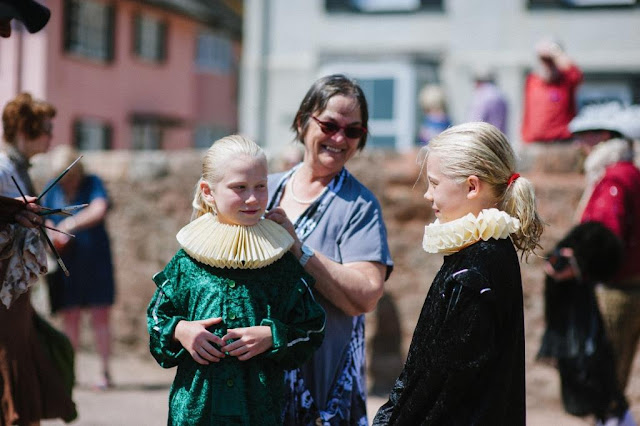 Katie and Isla learn about dressing as Elizabethans from Fairlynch Museum Head of Costume Betty Hebditch, whose team of volunteer helpers made the replica costumes

The original painting is still on display at Budleigh’s Fairlynch Museum. There is still free admission to most of the building, but this year there is a charge of £3 for the Raleigh 400 exhibition. There is no charge for children. 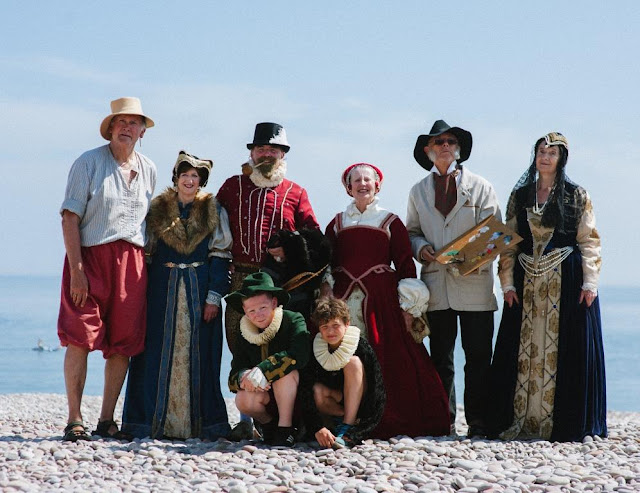 Some comments have been made about girls appearing in the re-enactment. ‘One of my friends told me that Millais would be spinning in his grave at the thought,’ admitted John. ‘However we had three pairs of children performing at the previous re-enactment in May – including a couple of girls – and they all really enjoyed finding out about Raleigh and Millais. It would be a shame to exclude anyone from a fun event like this.’

Over 1,000 children at local schools are now involved in the Museum’s education outreach programme thanks to a Heritage Lottery Fund grant and National Lottery players.

If you are aged between 7 and 15 and would like to take part in the re-enactment of ‘The Boyhood of Raleigh’ on Monday 27 August please contact Michael Downes on 01395 446407 or mr.downes@gmail.com 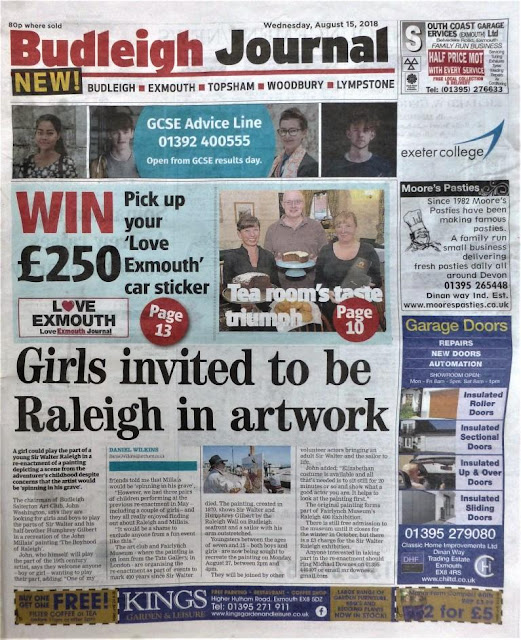 The front page of the Budleigh Journal, Wednesday 15 August 2018, by Daniel Wilkins