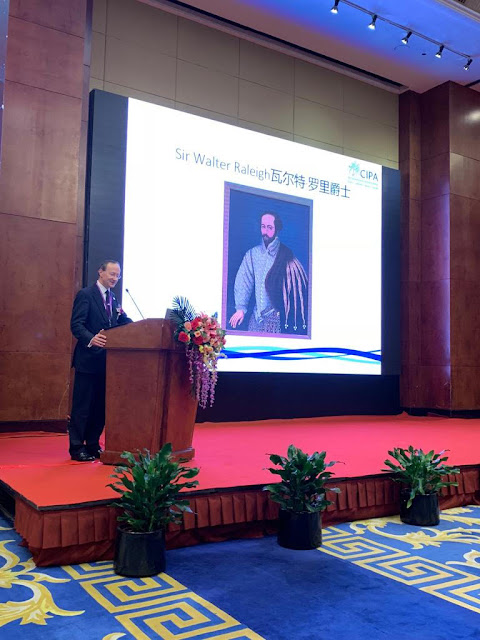 Above: Sir Walter Raleigh arrives in China!  Stephen Jones, a resident of Raleigh's home village of East Budleigh takes the opportunity to introduce the Chinese legal profession to Sir Walter at an Intellectual Property Forum as part of the China International Import Expo in Shanghai.

The screen image is the 1588 portrait of Sir Walter, a copy of which hangs in All Saints' Church, East Budleigh

'The grant of “patents” by Queen Elizabeth I and King James I to create arbitrary monopolies in commodities and channels of trade led to Parliament legislating to abolish the practice in 1624, but making an exception in the case of new inventions,' Stephen explained.

'This laid the ground for patents as we know them today. Sir Walter had benefited greatly from the previous practice but was stripped of all his privileges when he was sent to the Tower.'

In those days we looked at things narrowly in terms of our own national interests but Stephen explained how things have evolved to allow international trade to flourish, including by harmonisation of laws relating to patents and other intellectual property.

'I think that, as an international trader and amateur scientist himself, Sir Walter would have approved,' said Stephen. 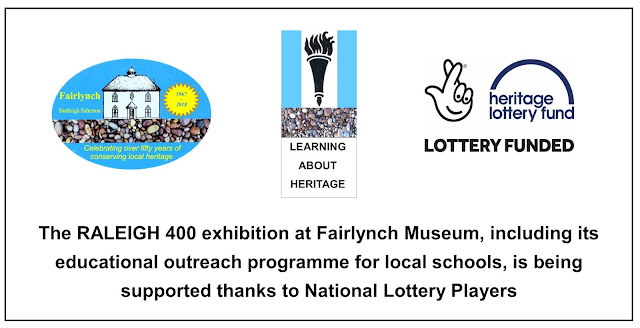