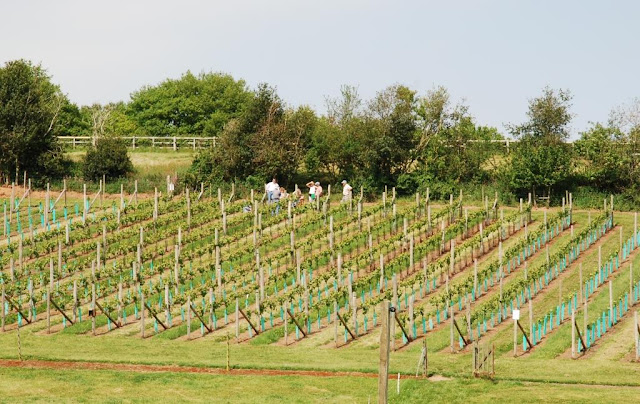 A view of the vines at Lily Farm, Knowle, just outside Budleigh Salterton
One of my favourite walks in the Budleigh area starts from the Dog & Donkey pub in Knowle, follows Dalditch Lane for a mile or so and then heads off up a sandy track to the right before plunging northwards into woods. Carry on in the same direction, and you find yourself on Hayes Lane, outside the picturesque farmhouse of Hayes Barton, Sir Walter Raleigh’s birthplace.
Early on in the walk you’ll notice the neat rows of vines on the south-facing slopes of  the appropriately named Lily Farm Vineyard.  It’s described on its website as ‘a small family run boutique vineyard established in 2005 that produces award winning English sparkling and still wines. www.lilyfarmvineyard.com
You can read more at https://www.winecellardoor.co.uk/2015/04/12/tiny-lily-farm-punches-above-its-weight/ 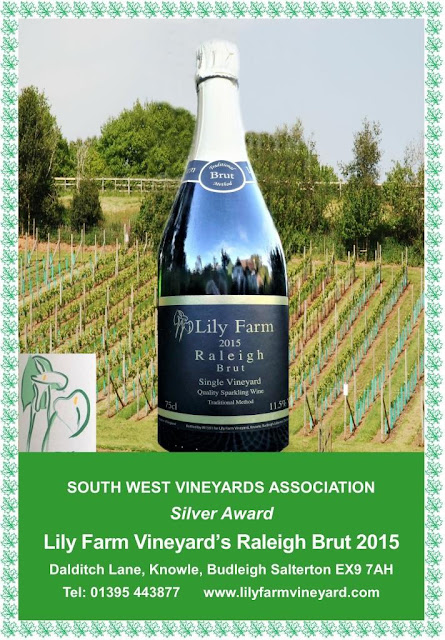 Young Raleigh may well have passed the place on his way from Hayes Barton to the coast, so it’s no surprise to find a Lily Farm wine named after him. Its Raleigh Brut 2015 sparkling wine won the South West Vineyard Association (SWVA) Silver Medal in 2017.
‘Made using the traditional method, bottle fermented and then aged on the lees for 10 months before being disgorged,’ is the winemaker’s description. ‘Aromatic, floral and delicate on the nose.  Crisp, zesty, lemony, yet  creamy smooth with honeyed notes on the palate.  Elegant with balanced acidity leads to a delicious finish.’
Sir Walter had a special interest in wine during his lifetime. In May 1583 he received a patent for the sale of wine and the licensing of vintners, receiving an annual fee from each licensee as additional revenue. The patent was renewed for a period of 31 years in 1588, but Raleigh was made to surrender it in 1602 when King James succeeded Elizabeth I.

Lily Farm’s Raleigh sparkling wine is not the only beverage named after Sir Walter. You can read about  Raleigh 400 ale, launched in 2018 by Dartmoor-based Black Tor Brewery, at  http://raleigh400.blogspot.com/2018/05/a-merrie-tale-about-ale.html

There’s also a Sir Walter Raleigh cocktail, as well as rums associated with the Great Elizabethan. You can read about them at https://raleigh400.blogspot.com/2018/11/of-raleigh-and-rums.html

The cocktail ‘goes easy on the tongue and puts you in a point of stasis where you can sit back and wax ironically about everything,’ writes the American enthusiast Professor Chad Wilson.

FOR THE RALEIGH 400  CALENDAR OF EVENTS