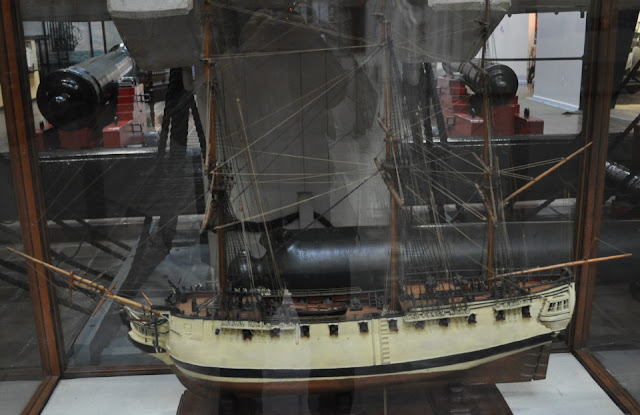 Above: Model of the USS Raleigh in the U.S. Navy Museum
https://upload.wikimedia.org/wikipedia/commons/b/b9/USSRaleighModel.jpg   Image credit: Sturmvogel66


Just one of the items featured in this Raleigh 400 quiz

1. Why did Raleigh not buy his birthplace in East Budleigh in 1584?
The owner, Richard Duke, refused to sell it.
2. What nickname did Queen Elizabeth I give Raleigh?
Water.
3. Which goddess did Raleigh compare the Queen to in his poems?
Cynthia/Artemis/Diana
4. Which English judge involved in Raleigh’s 1603 trial for treason is reputed to have said on his deathbed that ‘the justice of England was never so depraved and injured as in the condemnation of Sir Walter Raleigh’.
Sir Francis Gawdy.
5. What discovery did Raleigh make on the island of Trinidad in 1595?
Asphalt in the Pitch Lake.
6. The city of Raleigh NC in the USA, named after Sir Walter, has two districts named after him. Can you name them?
i. Budleigh and ii. Hayes Barton (Raleigh’s birthplace)
7. Raleigh sold one of his ships to the Queen. It became the first in the series of the most famous of the Royal Navy’s warships. What was the name of the ship?
The Ark Raleigh/Ark Royal
8. What action of the American Navy in 1776 really annoyed the Royal Navy during the War of Independence?
Naming one of its ships the USS Raleigh.
9. The Sir Walter Raleigh cocktail consists of brandy, curacao, grenadine and what other ingredient?
Rum.
10. What is the name of the Royal Navy’s Initial Training Establishment in Plymouth?
HMS Raleigh.
11. The theatre at the Royal Navy’s Initial Training Establishment is named after one of Raleigh’s ships. What is its name?
The Roebuck Theatre.
12. Raleigh 400 ale has been brewed in 2018 to mark the 400th anniversary of Raleigh’s death. What is the name of the brewery?
Black Tor.
13. What book by Raleigh did King James I describe as ‘too saucy towards princes’?
The History of the World.
14. Of which Irish town did Raleigh become Mayor?
Youghal.
15. The name of his house in this town is named after the plant that he is said to have introduced into England. Name the plant.
Myrtle.
16. Which Pre-Raphaelite painter was inspired to paint ‘The Boyhood of Raleigh’?
Sir John Everett Millais.
17. In which Dorset town did Raleigh build a castle?
Sherborne.
18. Of what was he accused at an official investigation in the Dorset town of Cerne Abbas?
Atheism.
19. What is the name of the church in East Budleigh where Raleigh’s father was churchwarden?
All Saints.
20. What was the name of the Spanish ambassador who demanded Raleigh’s execution in 1618?
Count Gondomar.