Remembrance of Raleigh in the city which bears his name 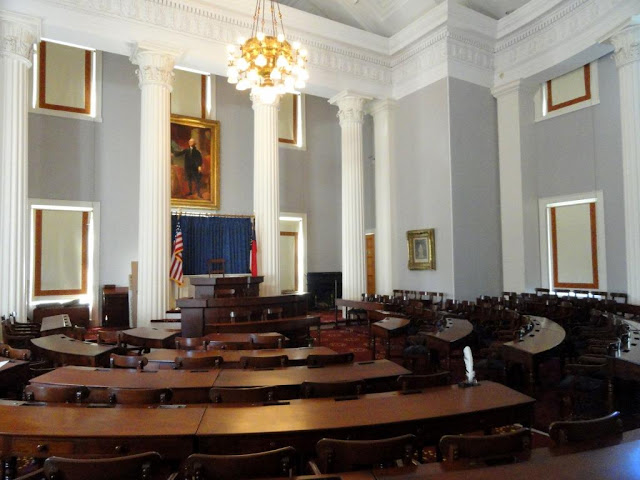 Above: The House of Representatives Chamber in the  North Carolina State Capitol

Even 400 years after his death, Sir Walter Raleigh continues to intrigue Americans as well as Britons, and especially in North Carolina.  Raleigh sponsored three expeditions to Roanoke colony in the 1580s, the earliest English attempt to settle North America.

In 1792, North Carolina’s legislature honoured this feat by naming the state’s new capital city for the explorer, soldier, and writer. Much later, two districts of the city were named Budleigh, after his home village, and Hayes Barton, after his birthplace.

On Saturday, October 27, the State Capitol joined worldwide remembrances of Raleigh by showcasing demonstrations of Elizabethan-era life on the Capitol grounds from noon until 4.00 pm.

Inside the Capitol, visitors were invited to view a rare copy of a 1652 edition of The History of the World, written by Raleigh. The book was on short-term loan from the University of North Carolina Libraries at UNC Chapel Hill.

This event was free and open to all. No reservations were necessary.