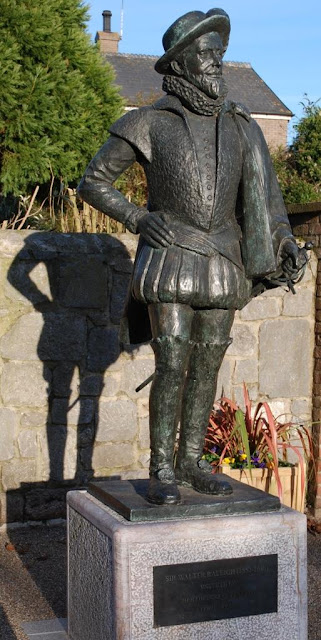 The statue of Sir Walter in his home village of East Budleigh, created by sculptor Vivien Mallock  and unveiled by HRH The Duke of Kent on 7 February 2006. Just one of the items featured in this Raleigh 400 Quiz

1. Which bird of prey would you associate with Raleigh?
Falcon – the name of one of his ships
2. The Raleigh family shield has two colours. White is one. What is the other?
Red/Gules
3. What achievement in astronomy did Raleigh’s friend the scientist Thomas Harriot achieve in 1609?
The first person to make a drawing of the Moon through a telescope, on 26 July 1609, over four months before Galileo.
4. Raleigh’s mother was a member of which well known Devon family?
Champernowne
5. Which local vineyard has produced a Raleigh sparkling wine?
Lily Farm, near Budleigh Salterton.
6. What was the name of the sculptor who made the statue of Raleigh in East Budleigh?
Vivien Mallock.
7. Which company controversially provided funding for the statue?
British American Tobacco.
8. Which South American country did Raleigh visit on two occasions?
Guyana/Venezuela
9. On which island in North Carolina is the outdoor drama ‘The Lost Colony’ staged each year?
Roanoke.
10. The first English-speaking child was born in America in 1587 to parents known as Raleigh’s ‘Lost Colonists’ . Can you name her?
Virginia Dare.
11. What was the name of the Native American Indian who visited England and was ennobled by Raleigh?
Manteo
12. His name is associated with which Devon town where a road bears his name?
Bideford
13. Raleigh was wounded during an attack by the English on which Spanish port?
Cadiz
14. What was the name of Raleigh’s surviving son?
Carew
15. What was the fruit, bearing the name of a Spanish town, which Raleigh reputedly introduced into England?
Seville orange
16. With which French Protestant/Huguenot family was Raleigh’s cousin Gawain linked by marriage?
Montgomerie
17. At which London-based law school did Raleigh study?
Middle Temple
18. Which Oxford college did he attend as a student?
Oriel
19. What did Raleigh reputedly describe as a ‘sharp medicine’?
The axe
20. In which area of London is he supposed to have lain his cloak over a puddle for Queen Elizabeth?
Greenwich.