‘From Exe to Axe’ - inspired by the local museum 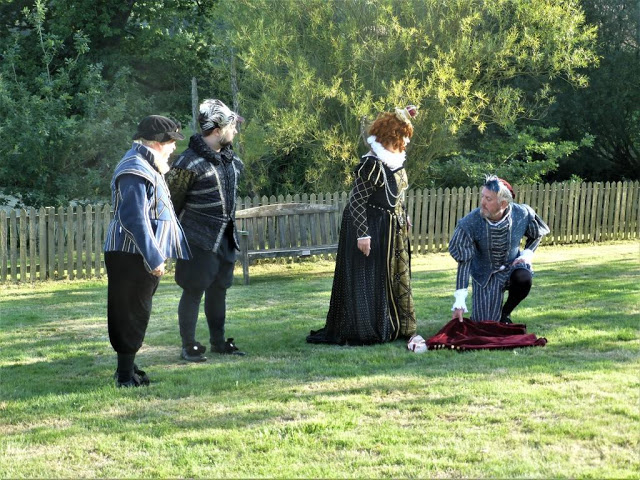 It was only right that a new play about Raleigh should be composed by a Budleigh resident. Just as appropriate was the staging of the premiere at Raleigh’s birthplace, Hayes Barton, by kind permission of Chris and Katie Down.

Written by Steve Andrews, the town’s very own playwright, producer and director, ‘From Exe to Axe’ was inspired by Fairlynch’s Raleigh 400 exhibition, as the author acknowledged in an interview on BBC Spotlight. 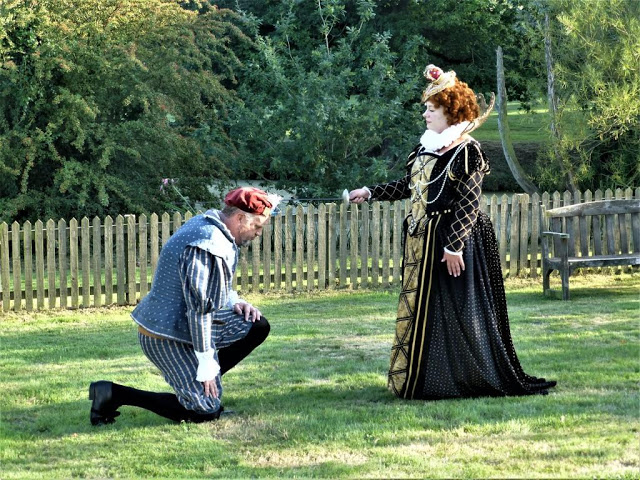 Raleigh is knighted by Queen Elizabeth

The play dramatises the life of one of the most remarkable characters of the Elizabethan era, from his birth in East Budleigh through to his imprisonment and execution in Westminster’s Old Palace Yard. It traces Raleigh’s life from Devonshire upstart through the glory years as the Queen's favourite and intrepid explorer to his final doomed expedition. 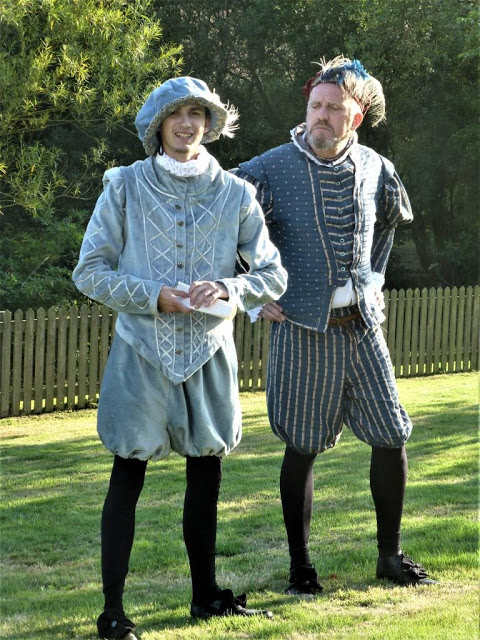 This is the tale of a flawed hero set against the intrigues and splendour of the Elizabethan court.

Steve is well known for his pantomimes, and more light-hearted productions. In 2016 he worked with your Editor on ‘Before the Buses’ a tribute to actor and local resident Reg Varney written to coincide with Fairlynch’s tribute to the star of ‘On the Buses’. 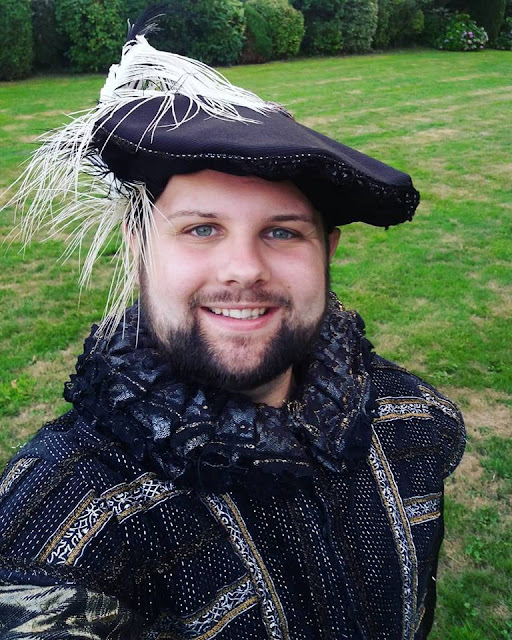 Actor James Cotter, pictured above, had the lead role in that production and he re-appeared in the new play as Sir Francis Walsingham, the Queen’s private secretary and spy master. 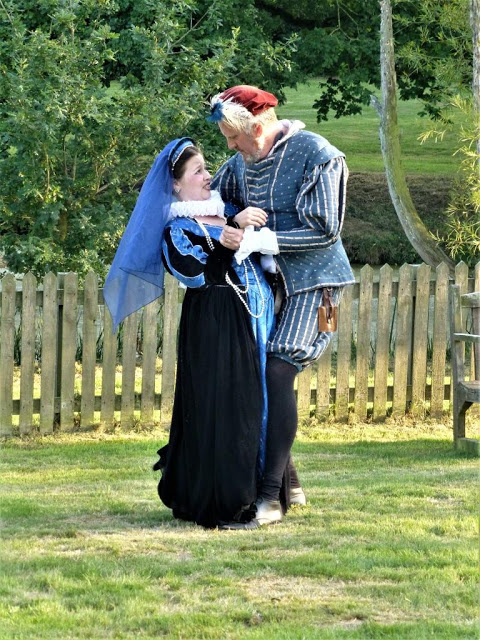 A tense moment between Raleigh and Frances Walsingham  (Shivani Chambers)


In a piece of artistic licence, Steve gives Walsingham’s daughter Frances the role of Raleigh’s nemesis, as a woman scorned by our hero.

An earlier play about Sir Walter came from the witty pen of Budleigh author and artist Joyce Dennys. Written to coincide with the first display of ‘The Boyhood of Raleigh’ at Fairlynch, it was marked by the arch humour associated with the ‘spuds and ciggies’ profile of Queen Elizabeth I’s favourite, famously satirised by the American comedian Bob Newhart. 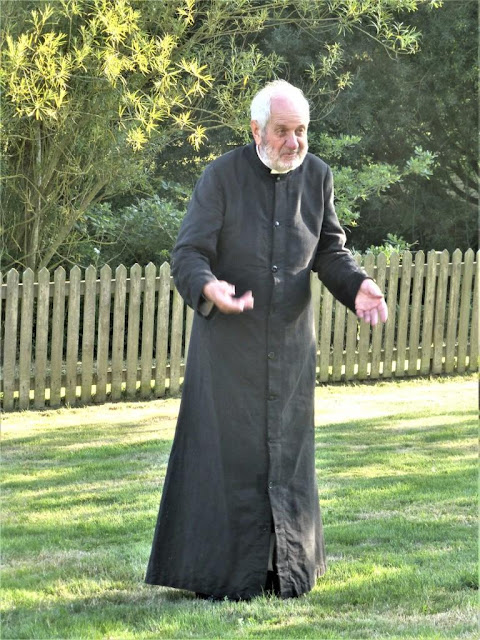 Steve Andrews, writer and producer, as The Priest

There are plenty of comic and entertaining moments in From Exe to Axe. But much of the Raleigh story is of dark ambition and betrayal, as Steve discovered from his research; there is from the start of the play, as he told me, ‘an atmosphere of fear and treachery’.  Walter’s childhood, after all, had been affected by the religious persecution which took place during the reign of the so-called Bloody Mary.

His mother is said to have been deeply affected by the martyrdom of the Protestant Agnes Prest, burnt at the stake in Exeter on 15 August 1557. You can see her memorial, sculpted by Harry Hems, in the city’s Denmark Road. 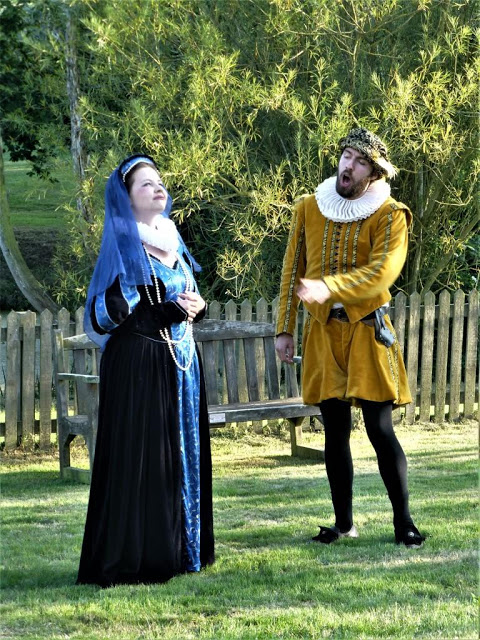 Shivani Chambers as Frances Walsingham, with Louis Osborne as the Earl of Essex

Much of the dark side of Elizabethan politics in ‘From Exe to Axe’ is recognizable in the modern Elizabethan age, including the persistent prejudices which, for many outsiders like Walter, characterize British society. ‘The mills of the English establishment take years – decades – to do their job,’ says Lady Raleigh. ‘But they grind you down in the end.’

Our local hero is after all seen as a Devon upstart by the resentful socially superior characters in the play. 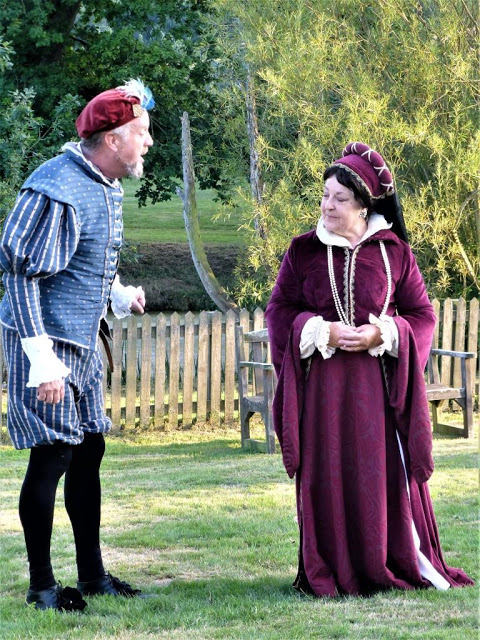 Bess, Lady Raleigh, is given ‘real thrust of her own’ as a narrator and commentator, as befits the subject of Anna Beer’s 2003 biography; it was the first serious study of a woman who for centuries had been overshadowed in the history books by her dashing husband.

‘From Exe to Axe’ has been an absorbing project for the author and the team of professional actors who put on five performances locally, well received by audiences. ‘Sterling performances by the actors in a beautifully crafted play,’ was a typical comment from one appreciative spectator.  To tackle the entirety of Raleigh’s life was a worthily ambitious project.  ‘It's been rather obsessive doing this,’ says Steve. ‘Such a brilliant tale to tell.’