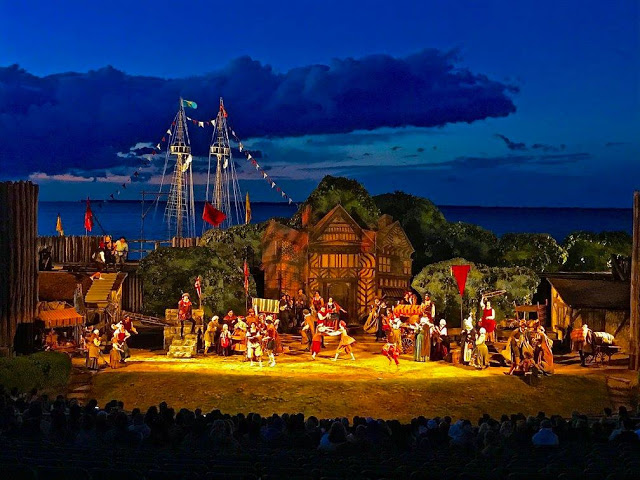 Across the Atlantic, the 2018 season of ‘The Lost Colony’ opened. Presented by the Roanoke Island Historical Association, this celebrated historical outdoor drama was written by American playwright Paul Green and has been produced since 1937 in Manteo, North Carolina. Over 200 actors, technicians, designers and volunteers are involved in the show.

The show is based on events in 1587, when 117 English men, women, and children came ashore on Roanoke Island to establish a permanent English settlement in the New World. It was a venture initiated by Sir Walter Raleigh. Just three years later in 1590, when English ships returned to bring supplies, they found the island deserted with no sign of the colonists.  After nearly 450 years, the mystery of what happened to the colonists remains unsolved.

The Lost Colony, is performed each evening during the summer on the same site where these actual events occurred.  Read more at https://thelostcolony.org/ 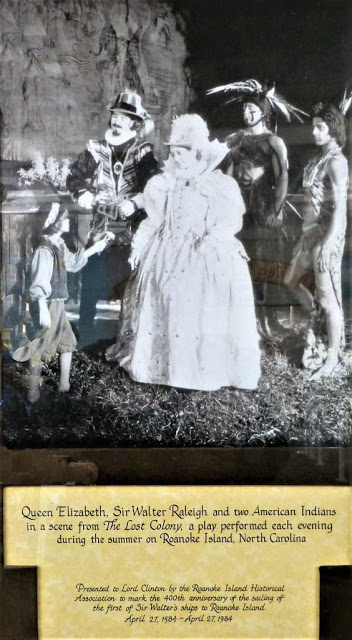 Queen Elizabeth, Sir Walter Raleigh and two American Indians in a scene from 'The Lost Colony'.  The photo was presented to Lord Clinton by the Roanoke Island Historical Association to mark the 400th anniversary of the sailing of the first of Sir Walter's ships to Roanoke Island April 27 1584 - April 27 1984.

The photo is in the Bicton Countryside Museum